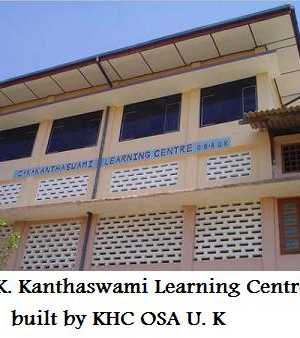 The C. K. K. Learning Centre is the second best IT facility in Schools of Sri Lanka, according to the Department of Education. The two old students who worked hard to raise funds for CKK LC fund in U. K are Mr. N. A. Pirapaharan and Mr. G. Kugathasan.

Better late than never was appropriate for the way KHCOSA (UK) decided to set up a Learning Centre in memory of our late Principal of KHC Mr C K Kanthaswami (CKK). It has been a custom in our community to do something in memory of a person after his demise, who had been very popular in that community,. CKK started teaching at KHC after his graduation and continued his services as vice-principal and retired as principal at KHC. The teacher who had dedicated his life for the betterment of the younger generation of Kokuvil and its neighbouring villages, chose to live in Australia after his retirement with his family, like many thousands of Srilankan Tamils. It would have melted his heart with joy during his later part of his life, if this Learning Centre would have been built or even mooted while he was alive.

Better late than never, the LC building in memory of CKK was completed before the third year anniversary of CKK’s demise. With the A9 road to Jaffna closed with the rest of Srilanka and the war intensified over an year in that part of the world, the determination of the KHCOSA UK and KHCOSA Jaffna, in particular the then president late Mr Nadarajah’s untiring efforts, with spiralling cost increase, managed to complete this magnificent majestic two-storey building with marble floor for £29,500. This money was collected in the UK from old students of KHC, which include CKK’s children as well.
Equipping the building immediately with appropriate modern state of the art learning materials including computers, softwares etc is paramount if the current student population is to benefit. It would sooth the soul of CKK if the students of CKK living all over the world had a hand in filling the building with the necessary materials for the current and future students of KHC.